How Much Does A Baseball Weigh? 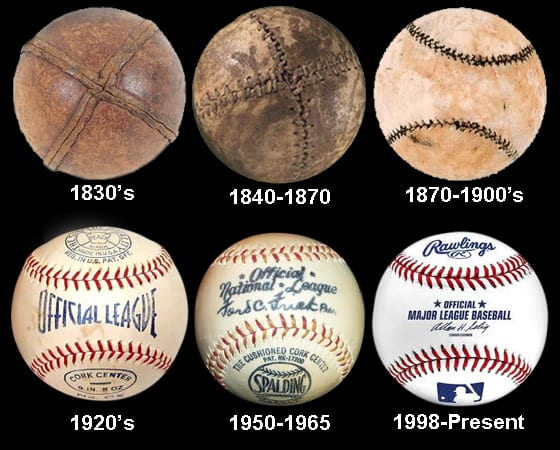 General
by Leave a Comment on How Much Does A Baseball Weigh?

Considering that some of the most popular sporting events are named after their respective ball in play, you’d think information about that ball would be common knowledge. That’s not quite the case, which has led to gaggles of curious baseball fans wondering exactly how much a Major League baseball weighs. That’s a fairly easy to question to answer, but it doesn’t come without a history. The context surrounding it can be pretty damned interesting, so while you’ll definitely get a definitive, early answer from our little guide, consider sticking around to hear more interesting facts about baseball’s namesake.

As you might imagine, baseballs haven’t weight the same thing during the entire lifespan of the immensely popular sport. Instead, they’ve ranged across a wide variety of sizes, shapes, styles, and materials used, but in 2016, manufacturing standards and the official rules in Major League Baseball dictate pretty specific requirements. Considering how much money is tied to professional sports, it’s no surprise that everything that can be kept the same between games most certainly will be, and the construction of each and very baseball is no different.

According to those rules, a ball in play cannot weigh less than 5 ounces, or more than 5.25. Anywhere on the scale is the sweet spot for a Major League baseball, but even though there is just a tiny room for varying weight, the materials used in each ball’s construction are very specifically sourced and controlled, meaning that it’s going to take a scale, most of the time, to tell the difference between two freshly manufactured baseballs. Even the slightest imperfection apart from this allowable difference in weight will cause a ball to be thrown out.

The nuance gets lost in the excitement of the game, however, and while the 5.00-5.25 ounce rule holds true for Major League games in 2016, the ball has undergone quite a few changes over the years. That’s only likely to happen for a sport that’s enjoyed more than a century of immense popularity, right? The answer above is still tenable in 2016, but if you’re interested in a lengthier overview of the baseball’s evolution, read on! Sources and further reading will be provided in the text, and after you’ve finished our brief guide, I highly recommend checking them out.

The types of materials used in a baseball’s construction have changed pretty wildly over the decades, but they have a current standard that’s followed immaculately, now. In spite of our advances in manufacturing, however, it might surprise you to know that all baseballs used in MLB games are sewn by hand. That’s right! All of the little red stitches that hold it together are put in place by talented workers. Machines are involved in many other parts of the material and manufacturing process, but no machine has been able to emulate the precise uniformity that comes from using baseballs stitched only by people.

It might also surprise you to know that the rest of the materials that go into each and every baseball are fairly traditional, as well. The center is made out of rubber and cork, which is then wound in a thick layer of yarn and cotton before finally being covered with rubber cement. All of this most certainly is accomplished via precise machines, but it all happens before that signature white leather ends up wrapped around it. Everything from the machine accuracy to the temperature control that ensures all materials are as uniform as possible are automated, but considering that hundreds of baseballs are sold every year, it’s practically mandatory, at this point.

The entire manufacturing process is fascinating, but it’s just a bunch of modern facts when it’s absent of the history that led to it. Thanks to the Discovery channel, you can watch a baseball being made right here.

History of the Baseball

If you can, try to compare the manufacturing standards we have for official sporting goods today, compared to what might have existed in the late 19th century.

Yeah. I thought so. History is one hell of a wild ride!

According to some resources, many baseball pitchers were responsible for making their own balls back during the origin years of baseball, when it was first recognized as an official sport. Rather than adhering to any sort of standards, balls were all over the place, and were often made of entirely different materials depending on who was playing–or more specifically, who was pitching!

In the late 19th century, the rubber-centered ball popularized, but would be quickly replaced by a cork center after the turn of the century. Even as alterations to the outside of baseballs persisted, the core remained one of the most frequently debated elements of its construction, apart from manufacturing changes in the 1920s that made the stitching more flush with the surface of the baseball. In the early 1930s, the cork center was reinforced by rubber once again, and we gained one of the earliest, close iterations to the baseball that’s currently in play, today.

Around the time of WWII, the United States became cut off from its largest suppliers of rubber…which even then, was used in the construction of a baseball’s core. This led to many years of radical improvisation that actually shook up the sport of baseball more than many of its star players leaving to fight in the war, during the 1940s. After the war, however, synthetic rubber was introduced to baseballs once again.

The changes that occurred between then and now are fairly infrequent, but involve the handing over of manufacturing responsibility from Spalding to Rawlings, as well as several minor changes in the regulated size and weight of official league baseballs. More detailed information can be gleaned from the links that we’ve provided above; sources who have approached the subject with scholarly interest, and are capable of detailing the minutia of a baseball’s evolution since the ball first became popular.

Variations of the Baseball

If you think baseballs have had a complicated history, hoo boy, we need only look at current regulations for softballs to see a more varied set of answers. “How much does a softball weigh,” is a hell of a lot more complicated of a question than anything concerning MLB regulated baseballs.

Baseball and softball actually have a comically intertwined history, reaching all the way back to the origins of baseball at the end of the 19th century. Softball has always been something of a “piggy-back” game to the more popular (and more strictly regulated) baseball, but that doesn’t mean there haven’t been standards that need to be followed with regard to ball size, construction, and weight.

The current standards for softballs are similar to baseball but actually allow for two different sizes of softballs to be used in play.

Depending on which league or organization the softball event belongs to, a different size of balls is used as per regulation, but these manufacturing standards exist for the same reasons as those do for baseball. Uniformity is exceptionally important for sporting events that are so critically dependent upon the performance of athletes. Given that fastpitch softball was recently added to the ticket of Olympic sports, there’s no questioning its legitimacy alongside baseball (which some aimless critics still attempt to do, on a regular basis.)

Of course, some of the most influential relics of sporting past are baseballs and softballs that were used in games decades prior, and the amount of money that these interesting artifacts can fetch makes them a compelling study. Whether they’re simply well-used game balls or are autographed by a particular athlete, they’ve helped to make for interesting analysis about how baseballs and softballs have changed over the years.

Of course, the original answer to this question, that a standard baseball weighs between 5 and 5.25 ounces, isn’t a sign of things changing and evolving like they used to. Even though the stitching together of the leather hide surrounding the ball is done by hand, the rest of it is shaped by contemporary manufacturing technology. No longer limited by what we could make and the tool by which we could measure baseballs’ effectiveness, we’ve been coming closer and closer to the “perfect” ball for the sport as it exists today.

You can run out and buy a Major League-approve ball right now if you want to. Local sporting goods stores typically sell balls that follow the same regulations as those followed by Major League games, and if you’re ever feeling skeptical, all you have to do is pull out a scale and a measuring tape to put your unease to rest. The standards have spoken! Now that we’ve told you how much a baseball typically weighs (and softballs, too!) be sure to check out some of our other guides to frequent and infrequently asked questions! If you’ve enjoyed the read, consider sharing this article on Facebook and Twitter!