How Much Does a Bone Scan Cost? 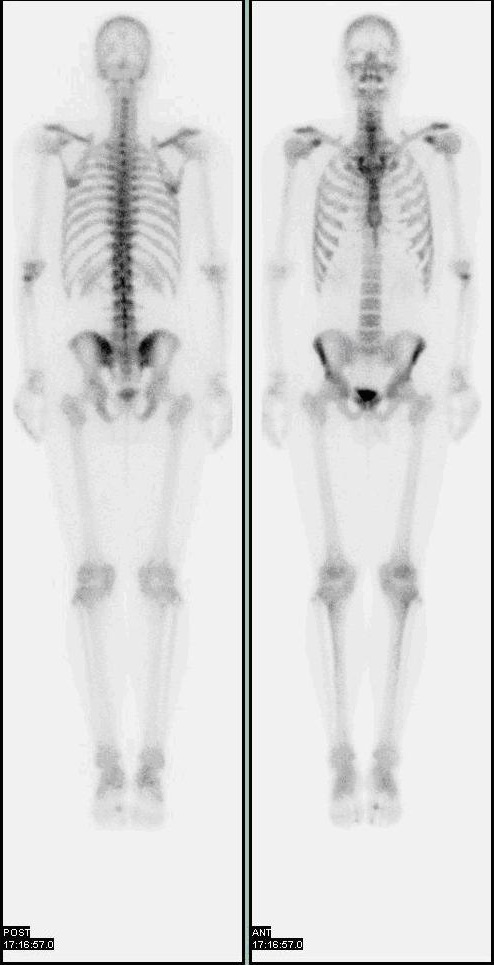 Medical
by Leave a Comment on How Much Does a Bone Scan Cost?

The field of medicine boasts a long list of highly sophisticated screening and treatment methods that help doctors detect conditions and plan for the effective management of them. One such screening is a bone scan. The term “bone scan” can actually refer to several different procedures that allow doctors to visualize the bones of the human body. Sometimes these scans are called “CT scans”, but CT scans can be used for non-bone tissues as well. Like any medical procedure, bone scans can be very expensive, so it is no wonder that many patients respond to a prescription for such a screening with the question, “how much does a bone scan cost?”

Bone scans are useful in screening the body for many different conditions, including injury, chronic damage, and diseases. Using a bone scan rather than other means of detection can allow doctors to see problems such as cancer in their early stages so that interventions can be put into place as soon as possible.

Patients that are at a genetic or occupational risk for certain conditions can also use bone scans to monitor their condition so that damage can be prevented or minimized. An example of such a preventative measure is a routine bone scan used to detect the beginning stages of osteoporosis in members of high-risk groups.

Bone scans are performed by placing the patient in a machine that utilizes radiation to create images of either the entire body or only the part that a doctor is interested in exploring.

Some screenings, such as those used to determine bone density or pervasive cancer, will require a full body bone scan, while others, such as damage to a particular area or centralized disease, only require that that part of the body is scanned. The decision to undergo a full body bone scan versus a partial body bone scan may be influenced by the relative risk the patient is at for having problems with the entire body.

Obviously, a partial body bone scan will come at a lower price than a full body scan, but saving money should not be the main component of a decision between the two.

Something that should be taken into strong consideration when planning a bone scan is the potential risk as compared to the possible benefit. Like nearly all medical procedures, bone scans (both partial and full body versions) carry risks for side effects and complications. Bone scans expose the patient to radiation, sometimes even involving the injection of radioactive stains that can indicate problem areas within the bones. Introduction of any foreign material, even by a medical professional, into the body can lead to illness and chronic damage. One such risk is the slight increase in risk of developing cancer.

The benefits of a bone scan can often far outweigh the potential risk. Disease that is detected at an early stage have better chances of successful treatment than those that are allowed to progress undeterred due to not catching it soon enough. Aggressive intervention at the earliest stages of conditions such as cancer and osteoporosis can mean the difference between overcoming the issue and continuing a fulfilling, productive life, and dealing with incapacitation or even death.

How Much Does a Bone Scan Cost?

Unfortunately, full body bone scans, especially those that are not directly requested by a doctor, are not often covered by insurance. Recently authorities have listed the procedures as eligible for reimbursement through employer coverage, as well as tax deduction. This makes dealing with the expense much easier.

On average, bone scans cost between $600 and $3000. Private medical imaging centers are likely to charge higher rates than hospitals or medical offices, and are less likely to take insurance coverage. If a patient feels the need for a bone scan and does not have doctor referral, such as if they want to determine their risk for osteoporosis, a private medical imaging center may be their best option. High costs of medical care, and the risk of non-payment, make many hospitals and medical offices reluctant to perform expensive procedures on an elective basis.

When making decisions about your health “how much does a bone scan cost?” should be asked only in conjunction with determining risk, benefit, and plans for furthered intervention.