How Much Do Video Game Designers Make?

Profession
by Leave a Comment on How Much Do Video Game Designers Make? 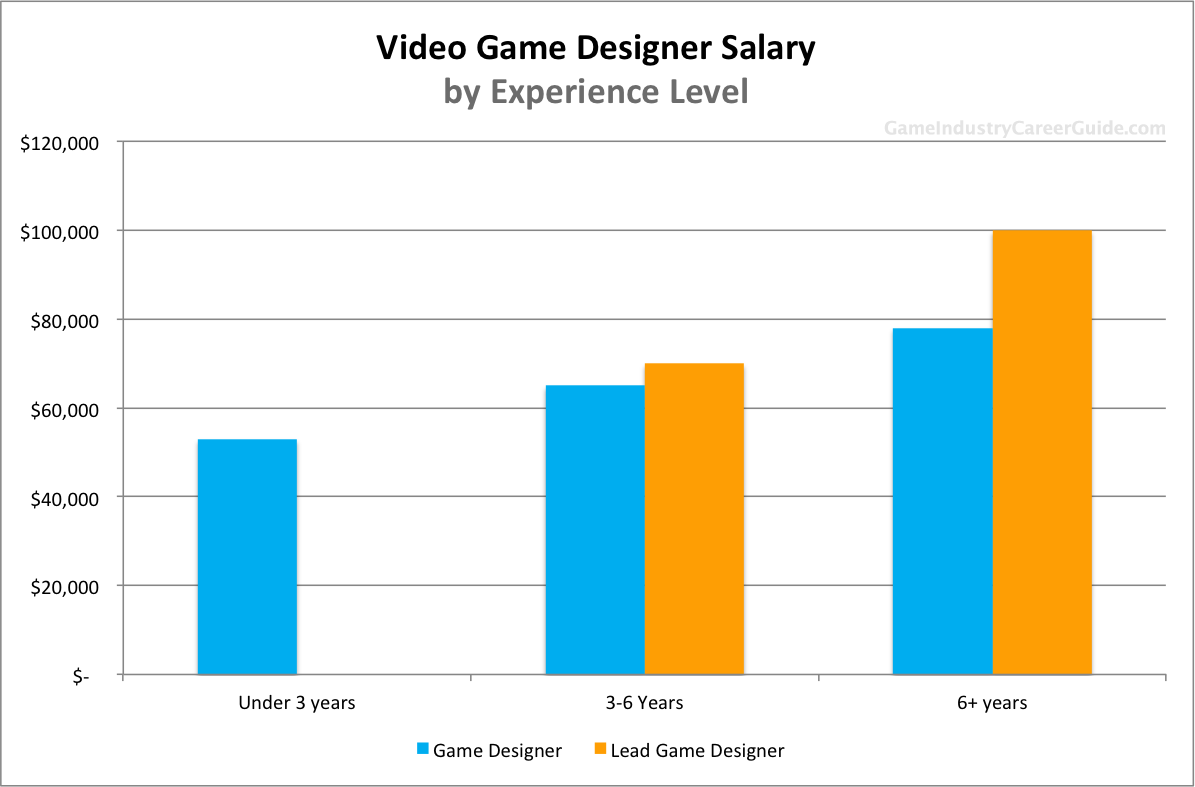 With how much the video gaming industry has boomed in the past ten years–thank, smartphones!–you might think that there isn’t a better time to break into the world of game development. Sitting right at the top of that pile of assumptions is how much the typical game designer makes per year. The truth behind that assumption might be…surprising, to say the least, but we’re here to dispell rumors and lay out the truth. If you’re interested in a game development career, the resources that we provide in this brief guide will be a great primer to the realities behind the industry’s careers; all things you should know before committing to the job.

That video games have never been more popular is certainly true. As we saw in July with the phenomenon that was Pokemon Go, there are few people out there who won’t give video games a chance as long as the game is up their alley and pitched in an appealing way. The age of the average gamer has been steadily on the rise for years, and the industry is no longer so gender-divisive as it once was (at least, in terms of the representing player base.)

All of that said, why isn’t game development a better-known career path? Why aren’t people openly flocking towards it? What sort of background does game development require, and how much is the average game developer going to make in a year?

Before we start throwing around numbers, it’s going to be important to deliver an understanding of what exactly this widely-touted set of skills is going to entail. More than many computer science-related careers, game development is riddled with false assumptions outright bad information. Outright bad advertising has continually painted a misleading picture of what the career entails and, more importantly, what it will demand of people who decide to commit themselves to it.

After all, being a “game designer” can mean many different things. If you’ve played a recently-released video game, you’ve probably noticed that the experience has become more cinematic than ever before. Graphics, sound, narrative, environment design, and more are all areas of a game’s development that typically demand many talented people working towards a singular goal. The video game experience has become more cinematic and the process of making those games is becoming more akin to what it takes to make a movie.

According to the Game Industry Career Guide, entry-level salaries for game designers are somewhere around $45,000, with a ceiling that extends far, far about that. The average for a senior-level game designer is $100,000 and upwards, while a project lead on a studio-backed AAA title is going to make considerably more than that, even. Keep those numbers close as we explore some of the nuance associated with the different game designer roles.

What Does a Game Designer Do?

Rather than salary-related questions, this is what most game developers wish that people would ask, before committing themselves to the pursuit of a career in the field.

More and more, the answer is, “everything!” Game designers do just as the broader title of the job might imply, but there are a huge number of places that a game designer can fit into development teams, large and small. Environment design, 3D modeling, sound design, coding, storyboarding, writing, art design and more are all responsibilities that may seem like they’d be more appropriate for different specialists, but a high-quality game designer with a broad skill set should be able to approach all of them.

You’ll notice that one thing is absent from that great, big list–the idea person. Maybe you’ve had a great idea for a new, original video game. For years, you’ve been fostering your genius strategy that will make for a killer game, if only you could gain the necessary skills or job to put it into action. After all, according to a great deal of advertising that you encounter on social media and even on television, that’s what game designers do, right? Cook up an award-winning idea, pitch it to a studio, get funding, and then watch as talented coders, artists, and programmers bring your idea to life.

Regardless of popular perception, this is not how game design works at all. There is no “great leading idea” that dictates the work and actions of an entire team of people. Contrary to what advertisements might have told you, a game design career will not be benefitted by how much you love to kick back and play video games. Instead, game design should be looked at as the team effort that it is; the collaborative effort of dozens, even hundreds of people on the largest titles, all fitting the bill of “game designer” and all of them putting all of their numerous talents to work for the eventual success of the title that they’re working on.

Is there a “lead” game designer for every project? Sure, but that person is going to be doing just as much work as everyone else, if not more. So cast aside any thought that a “great idea” is going to lead to a great career in game design. It’s a lazy myth that’s unfortunately perpetuated by organizations that want to sell you a degree.

A recent study by Sokanu provides the actual scale of pay that you might see as you advance through a career in game design:

All in all, these are not bad salary rates for someone wanting either experience or a long-term career in the computer science field. However, before you become too excited about salary prospects, do recall that most of these jobs require relocation to an urban area, where most of the game development takes place. Cities are always going to have a notably higher cost-of-living, which should always be taken into consideration when you’re shopping for prospective salaries.

Is Game Design a Competitive Field?

Here’s an area where we need to dispell a few more misconceptions since they frequently lead to people pursuing something that just doesn’t exist.

Game design is an immensely competitive field. Not only that, it’s extremely demanding of the people that populate the career. How do 80-hour work weeks sound? How about a reputation-driven career climate? Will you enjoy the scrutinizing words of the millions of people that play your game, if you work on an AAA title? How well do you work in a crunch? I hope you don’t enjoy your weekends, too much!

While I may be guilty of a few slight exaggerations, by and large, these are the realities of a game design career. Crunch time for developers is brutal. The months and weeks leading up to a game’s release result in some of the most stressed-out career professionals in existence, sheerly because of how much work is expected of them.

While the amount of work that’s on a game designer’s plate is always going to depend on the project that they’re working on, rarely is it anything less than what will consume an easy 40 hours of a work week. “But what about indie game development?” you ask. “Can’t I control my own hours, then?”

You sure can! You’ll also be entirely in control of securing funding for the respective project, to ensure that you’ll be able to get paid at all. On top of that, you’ll be managing the workflow of the entire project, and juggling tasks between an abnormally small team of designers while trying to live up to the expectations of gamers who’ve become accustomed to AAA multi-million dollar titles.

There’s one thing that I’m getting at, here, if it isn’t visible yet–you need to be passionate about making video games if you want a career in game design. Salaries and job prospects aside, you will not succeed in this career with anything less than a heartful of passion; the kind that doesn’t mind losing a weekend to work, or putting in an 80-hour crunch week in order to ensure that the game gets the polish that it needs.

If that sounds like you, then there’s a good chance that you could do well at the entry-level game designer salary, as long as you’re in the region to find a job within the field. Couple that with passion and a willingness to work your way up from the bottom of a brimming professional field, and the salaries that we’ve provided statistics for might be yours! If you’ve been curious about how much a video game designer makes, you now have an answer in addition to some stark realities about what a game designer does.